The road from Ceres to Clanwilliam, via Wupperthal through the Cedarberg Mountains is one of the most attractive routes that I have been on. It is 220 kms long with about 100 kms on tar, 80 kms on good gravel road and 40 kms on a very bad road where a high clearance vehicle is essential. It took us two hours to do those 40 kms in a Mitsubishi double cab 4×4. My photos of the trip are at: http://picasaweb.google.com/bobbystodel

The initial 60kms from Ceres, through Prince Alfred Hamlet, over the Gydo Pass and through Op die Berg is easy driving pleasant fruit farming scenery. This is the Koue Bokkeveld which is relatively dry and so the environment gets increasingly dry with occasional clumps a green around farms. The road passes through a series of long valleys where one can see the rod drop down to a farm or settlement and then ascend on the far side of the valley, up to 10kms away.  We stopped for a light lunch at Mount Ceder where they farm olives.

Fourteen kms later most of the traffic heads off west towards Algeria, the main hiking start point in the area. Our road deteriorated significantly with potholes, rocks, bumps and puddles. The going was slow. The scenery was amazing. I loved it! We came across no traffic until we had passed the small, isolated community of Eselbank. We crested the Eselbank Pass and then started the last four kms descent at walking pace down the steep hill into Wupperthal. 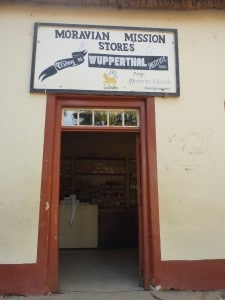 I have lifted a description from the internet which goes as follows: ‘This picturesque place has been a Moravian mission station since 1865, although its origins are actually Rhenish. The name “Wuppertal” derives from the Wupper River in Germany, from where two Rhineland missionaries, Theobald von Wurmb and Johan Gottlieb Leipoldt (grandfather of renowned writer C. Louis Leipoldt) arrived in the Cape in 1829 to spread the Word among the indigenous people. The two missionaries settled among the seven Khoikhoi families in the valley and concentrated on their spiritual upliftment as well as to encourage farming. The population swelled shortly after slavery was abolished in 1838 and many freed slaves arrived from nearby farms.
The village today consists of an old thatched Church, a store, and terraces of neat thatched-roofed little cottages and a meandering street with water flowing in furrows.
A great deal of productive activity takes place which surprises any traveler descending the steep pass into the valley. Excellent velskoen (known throughout the country) are made and tobacco is dried and worked into rolls (roltabak). The other main products of the area are dried fruit, dried beans and rooibos tea.’

I went in search of diesel to be told that the tanks were dry and the next supply wasn’t expected for several days. Fortunately I just had enough in my tank to get me the 75kms to Clanwilliam. 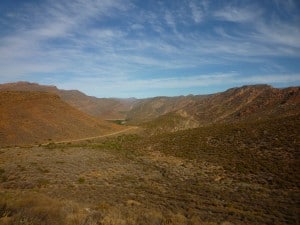 There was a good gravel road after Wupperthal which climbed out of the valley in the Tra Tra Mountains, giving spectacular views from the Kouberg Pass, to then crest the mountain with further wonderful views of the next valley. We climbed through the Hoek se Berg pass and eventually joined the newly tarred R364 from Calvinia which we then followed towards Clanwilliam. We climbed once again, this time through Pakhuis Pass and passed through wonderful rock formations, similar to those we had seen near Kagga Kamma. And so we arrived in Clanwilliam after an amazing drive.