Tibby and I went to the Kagga Kamma Game Reserve in April 2010. It is in the Swartruggens Mountain Range which is a south easterly extension of the Cedarberg. It is 100kms north east of Ceres with the last 35kms on gravel roads. One can get there with a normal car but you will lose several screws in the process and will be reliant on the organised drives to proceed beyond the main camp. We hired a Mitsubishi 4×4 double cab for the trip.

There is both an hotel and a time share camp. We stayed in a time share unit but had dinner in the hotel one night and also had a look at the hotel rooms. We had booked for four nights but left after two because of a lack of things to do but also because of the poor quality of the place.

The road there is wonderful. The joy starts, if travelling from Cape Town, as one traverses the Bains Kloof Pass. One climbs a long road up the mountain above the wide Wellington valley. The descent on the other side is high above the kloof with gorgeous mountains all around. The road thereafter is pretty and one then travels through Michell’s Pass just before Ceres, Gydo Pass after Prince Alfred Hamlet and the magnificent Katbakkies Pass just before the final road to the Reserve.

As one drives through the last 20kms you encounter the most wonderful rock formations. There are stand alone rocks, rock clusters and rock mountains. They are big and bold with amazing shapes. They have holes and arches and balance in the most improbable formations. The rocks are the main attraction of the Reserve as they extend for long distances. I did the two hour Klipspringer Hiking Trail which took me down a spectacular river bed with amazing rocks all around. It was unusual and very special.

And then the joy stops. The Reserve is effectively on a mountain plateau at an altitude of 1,000m (the same height as Table Mountain) and thus the area is quite barren with no trees but plenty of low level thorn bushes and hardy fynbos. It is clear from the information that the Reserve has only been stocked with antelope and minor animals. We did see a herd of Eland at a distance, which was lovely, but otherwise an occasional lonely buck was all that was to be seen. Animals have no responsibility to show themselves but I suspect that there were not many hiding from us in the low level bushes.

I was left with an overwhelming sense that the owners are mean. They had stocked the Reserve with the minimum number of animals. The organised game drives to see this small number of animals were expensive. The expensive dinner was unimaginative, offered little interesting choice and tasted plain and boring. No wonder that we were the only people eating in the restaurant that night. The hut and cave hotel rooms that we looked at might have been special in 1990, when they were probably built, but now they are looking tired, especially the bathrooms and certainly didn’t deserve the rates that were asked. I think their apparent four star rating must have been issued in fantasy land.

The time share unit we stayed in offered poor accommodation.  The unit was wearing badly and the bathrooms were outdated with stained basins. There is one single electrical socket above the kitchen work surface requiring one to continually switch plugs between the microwave, kettle and toaster. We had to pay a deposit to stop us stealing the minimal range of old and worn cutlery and crockery. The mattresses provided little support. The chimney needs to be swept to stop the smoke from escaping into the lounge. The electricity gets turned off, not only at night, but also for periods during the day. This is dressed up as an eco measure but I think that it is another way for the owners to save money. We thought that they were economising on gas because the hot water was not hot enough to bath in but when we complained they turned a knob on the boiler which then gave us decent hot water. If it had been warmer we would have wanted to sit outside but the stoep area was a bare platform outside the front door with no shade covering or attractive adornment. One is bombarded with rules. We could not get dinner in the hotel when we arrived because ‘one must book a meal one meal before’. There were four pages of rules pasted above the kitchen sink. We had to delay our departure for half an hour while someone checked the inventory of the time share unit.

I do not recommend visiting the Kagga Kamma Reserve. The journey to the Reserve will provide you with a huge amount of beauty and joy. When you get to the gate turn around and go back because the experience thereafter is miserable.

Back to the Game Reserves index
0 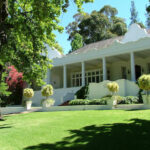 Ceres to Clanwilliam via Wupperthal