I attended a 75 minute performance of ‘Rewind: A cantata for voice, tape and testimony’ at The Royal Festival Hall in London on Thursday 6th May 2010.

This cantata was written to celebrate the ten year anniversary of the South African Truth and Reconciliation Commission (TRC) which held its first hearings in 1996. The website of the Commission says that it ‘was set up by the Government of National Unity to help deal with what happened under apartheid. The conflict during this period resulted in violence and human rights abuses from all sides. No section of society escaped these abuses.’ Mr Dullah Omar, a former Minister of Justice said “… a commission is a necessary exercise to enable South Africans to come to terms with their past on a morally accepted basis and to advance the cause of reconciliation.” The Commission heard evidence from those who perpetrated abuses and those who suffered as well as their family members. The Commission is viewed as having been very successful in helping South Africa acknowledge the actions of the past and move forward in a constructive way.

I am not sure that I am qualified to write about this performance. It was not just a musical performance but carried with it the significance of all the TRC stood for. I grew up in South Africa in a time when many of these abuses happened. I left the country in 1978, and although I have spent several months a year there in recent years, I was not in the country while the TRC was sitting and thus missed the daily reporting of the hearings. I did not know anyone who suffered abuse or was involved with the TRC or gave evidence to it although I suspect that some of the members of the audience did. I also have no music training and cannot make any expert judgement on musical matters. Nonetheless I developed a view of the performance.

I do not know whether the performance should be viewed as a memorial for those who suffered or as a musical concert. A string octet of violins, violas and cellos supported four South African soloists and the 100 strong Southbank Centre Township Choir. A large confessional-like screen hung between the choir and the audience on to which film was projected at times. At other times the choir was visible through the screen. The film excerpts were generally a representation of elements of testimony to the TRC. Most of the time recordings of the actual testimony were played. The quality of the recordings was sometimes poor. The same recording was often repeated several times. The libretto was principally the words used in testimony. The libretto was mainly in English but included elements in Afrikaans, Xhosa and possibly other languages.

The name ‘Rewind’ was derived from the testimony of Mrs Miya who heard about the death of her son on television and who prayed ‘Oh no Lord! I wish the news could rewind’. The composer, Philip Miller, also had to listen to many hours of recorded testimony and to rewind the tapes again and again to choose the testimony to use.

I am sure that anyone who suffered abuse will be pleased that the TRC testimony is being remembered. Even those who knew nothing about the TRC will have left the performance knowing a lot more. However, by choosing to use recordings of the testimony, one often battled to hear through the screechy poor recordings. I felt that the representations of the testimony on the screen were often irrelevant and suffered from a poor artistic presentation. I understand that the nature of a cantata is a vocal presentation with the accompaniment of a few musical instruments but I felt that the strings generally screeched rather than supported the voices. The voices, particularly those of mezzo soprano Sibongile Khumalo and baritone Fikile Mvinjelwa were the redeeming features. The words of testimony do not easily convert to song and so, at times, the singing was quite tortured (which may well have been the intention). At other times the soloists soared  high with beautiful African singing.

The real surprise was the choir. When I first saw the mass of white faces, with just a few blacks amongst them, I feared that they would have no hope of creating anything that was believably African. They shamed me and proved me wrong. They were strong. They clicked and pronounced wonderfully. They supported well and, in two numbers, they took the roof off in powerful song. In an apparent unplanned encore, after bows had been taken, Fikile Mvinjelwa burst into song, for a moment leaving most on the stage looking nonplussed and then the choir leapt to life and supported him.

I think that this was a difficult subject to commemorate in song. Much of the testimony was difficult to hear. The presentation was quite discordant at times. The audience was confused as to whether to applaud a song of horrible actions or not. This was not entertainment. This was, generally, not enjoyable. I felt that the presentation was too patchy to be a proper memorial, but perhaps, I should not be the one to make that judgement. 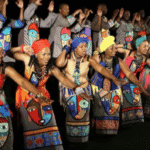 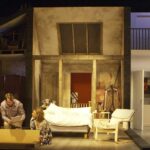