Tibby and I travelled 1,400kms in 27 hours on the Blue Train from Pretoria to Cape Town on 13th and 14th December 2010. It was a very special experience but probably only worth doing once. 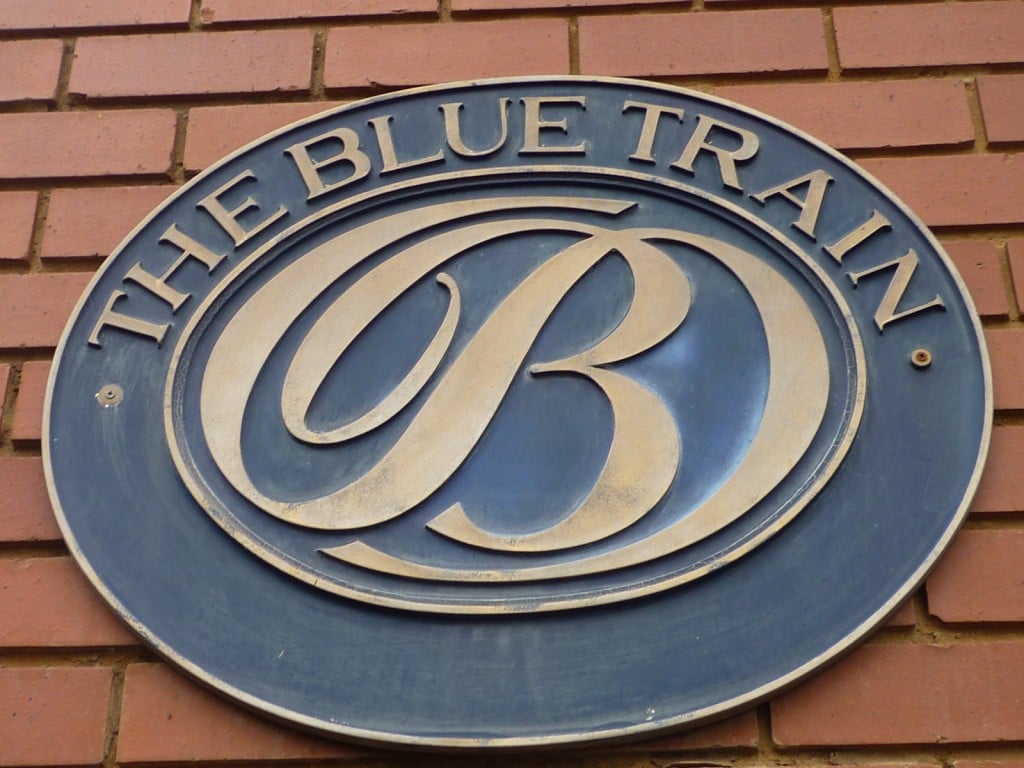 We gathered at about 08h00 in the Blue Train lounge at the side of Pretoria Station and enjoyed coffee and light snacks. Twelve butlers lined up and the butler, assigned to our suite and two other suites, led us to our respective suites. 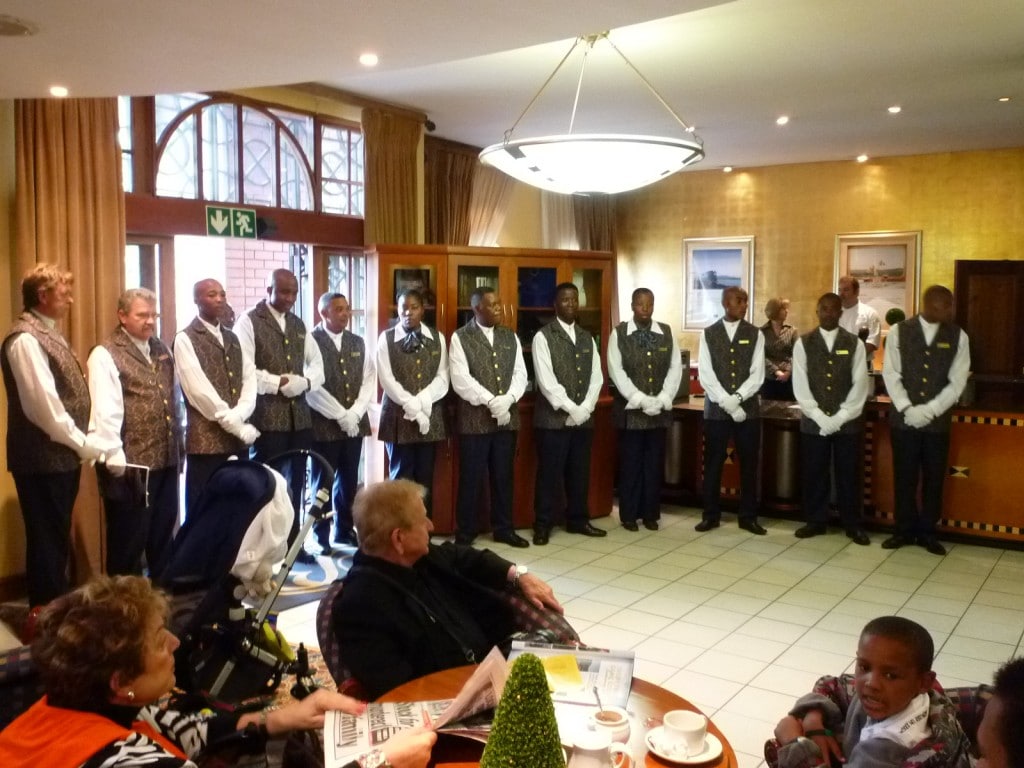 Our suite was about 3.5 metres long with the en-suite bathroom being another 2m. The walls were panelled in fine wood. During the day there were two comfortable seats against the wall with a table protruding beneath the large window. 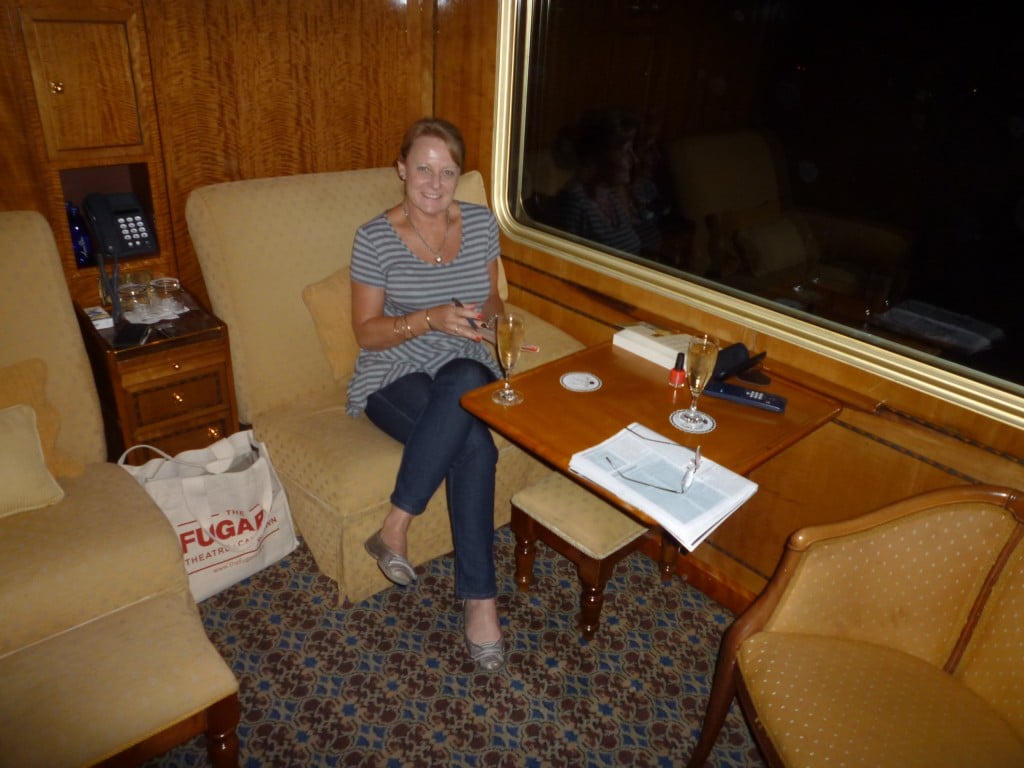 There was a dressing table, mirror and chair to the left of the bathroom door and a wardrobe to the right. There was a TV above the wardrobe which offered the alternatives of a CCTV view of the track from the front of the train, a map showing our location, four movies and four music channels.  There is space for small suitcases above the communal corridor accessible from the suite. One can leave luggage in the baggage car. The bathroom had a normal sized bath, a good sized basin and a toilet. There were plenty of towels and hot water. 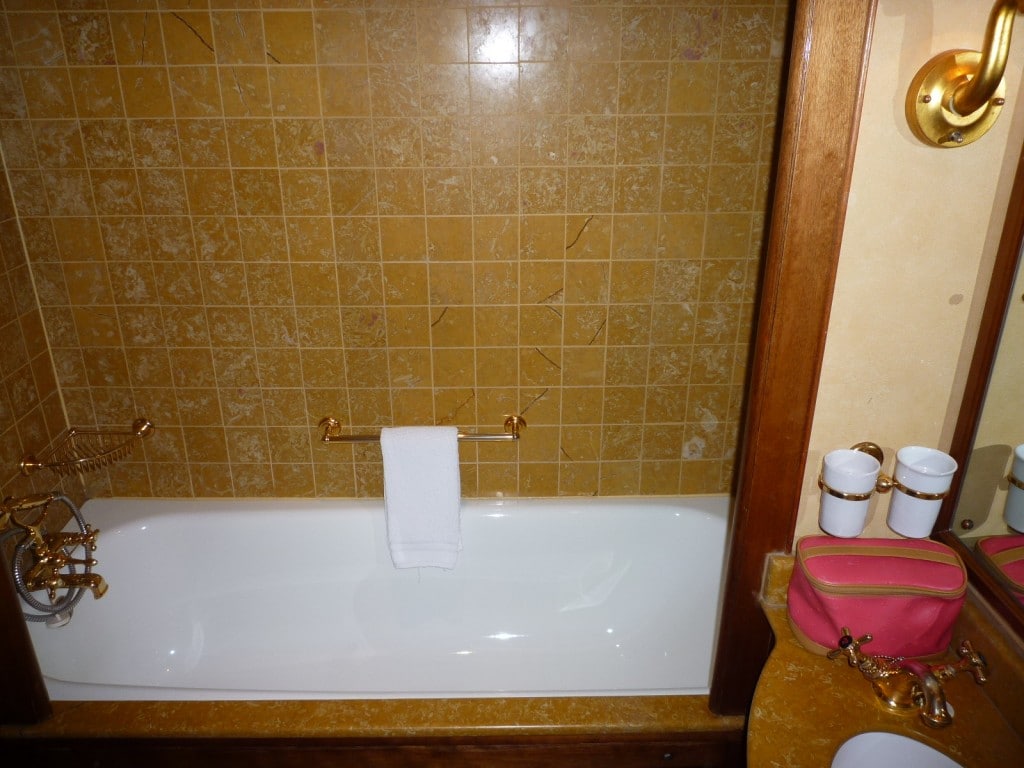 When needed, the table in the suite was folded down and beds swung down over the seats in the suite. The beds were narrower than normal at about 2’6” but had excellent mattresses and lovely linen. There was a reading light above each bed and a gap between the beds of about 20cms. 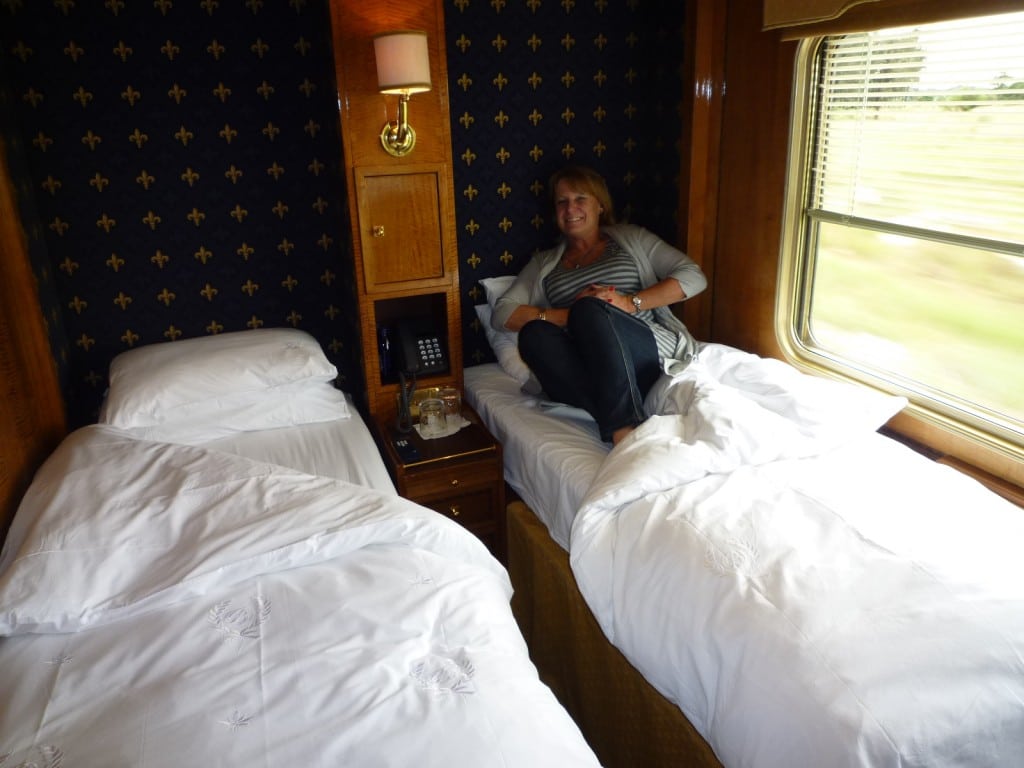 There is a telephone to call other suites and your butler. This was a comfortable and luxurious base for our journey.

We were in a luxury suite with three to each carriage. The alternative is a deluxe suite where there are four suites to each carriage. The deluxe suite is about one metre shorter than the luxury suite and generally has a shower rather than a bath. There is a choice of double or single beds in each class of suite. There were 32 suites on our train and thus accommodation for 64 guests. There were 24 staff on the train. The train had 17 carriages and two diesel locomotives.

Having unpacked we moved to the lounge car. It has a bar, four small tables on one side, each with two chairs, and built in uncomfortable sofas on the other side. 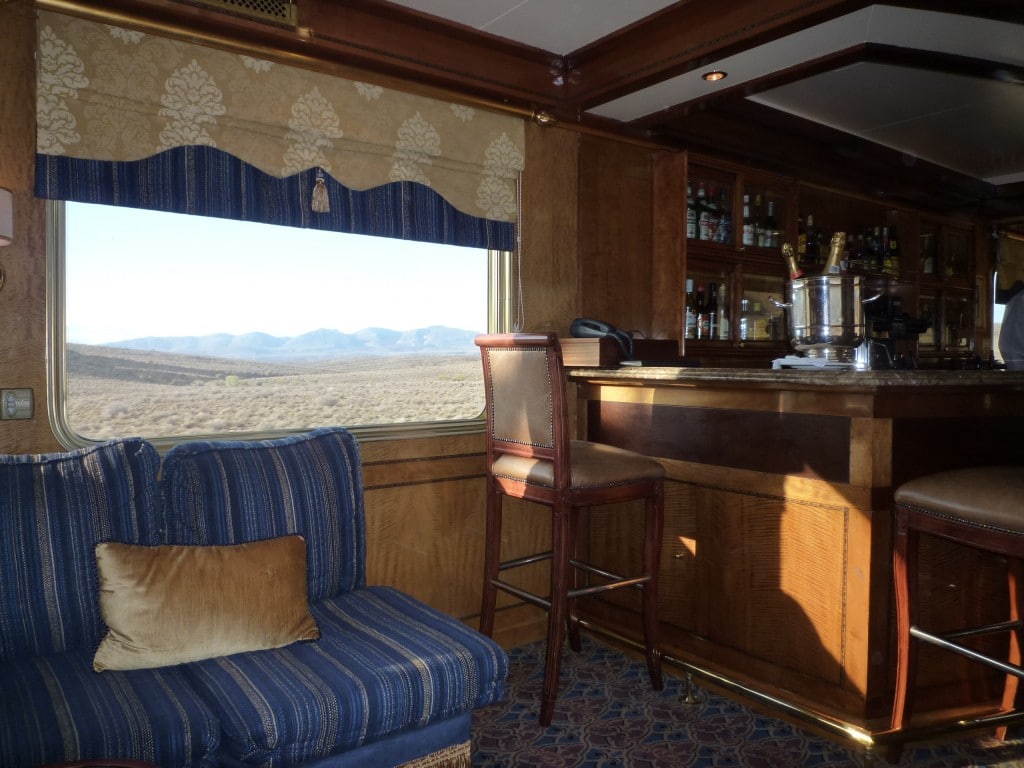 The two barmen, Adrian and Becki, could not have been more attentive. Throughout the day, late into the night and from early the next morning they provided a happy service with a continual wish to provide drinks and snacks. All food and drinks are included in the price so it is easy to drink often. 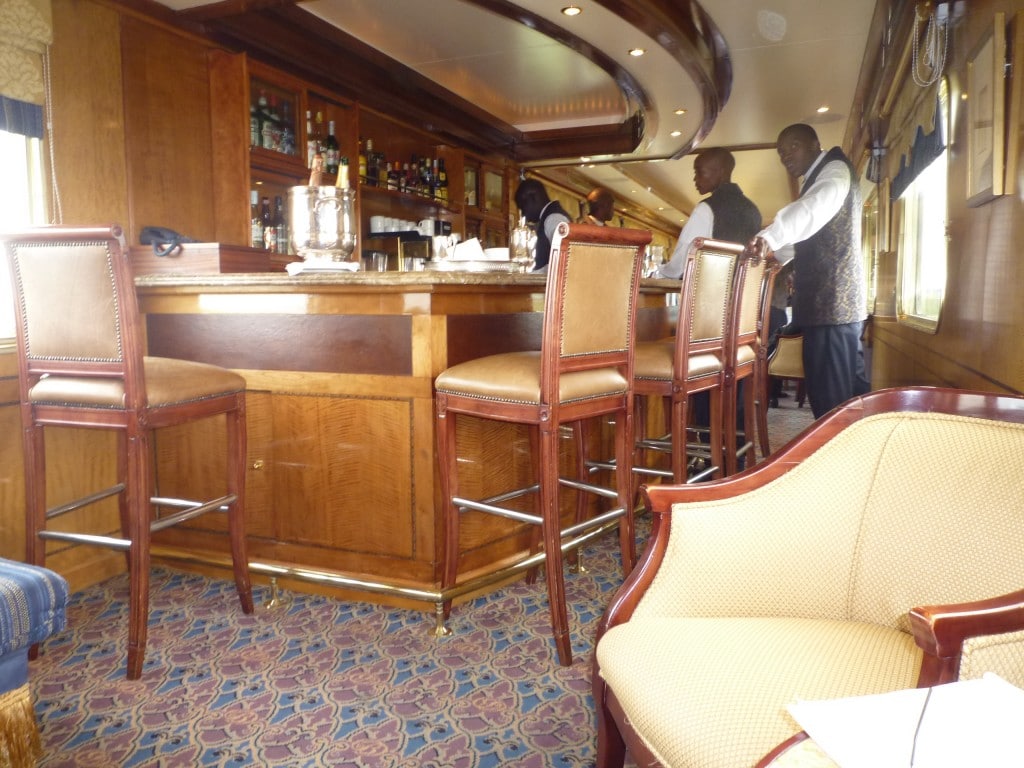 The barmen were also serving the suite butlers who were collecting drinks for their guests in the suites. Elsewhere in the train there is another lounge called the Club Car which is the smoking car. Needless to say it is like walking into an ashtray; so I stayed away. The mood in the lounge is happy as most guests are in a celebratory mood and one overhears happy stories of birthdays and anniversaries. Unlike in the compartment, one also has a view of both sides of the train so it is a great place to watch the scenery.

We left Pretoria about 30 minutes late and travelled via O.R. Tambo Airport, Vereeniging and Klerksdorp towards Kimberley. As we moved through Pretoria and the outskirts of Johannesburg we were passed near to many shanty towns. 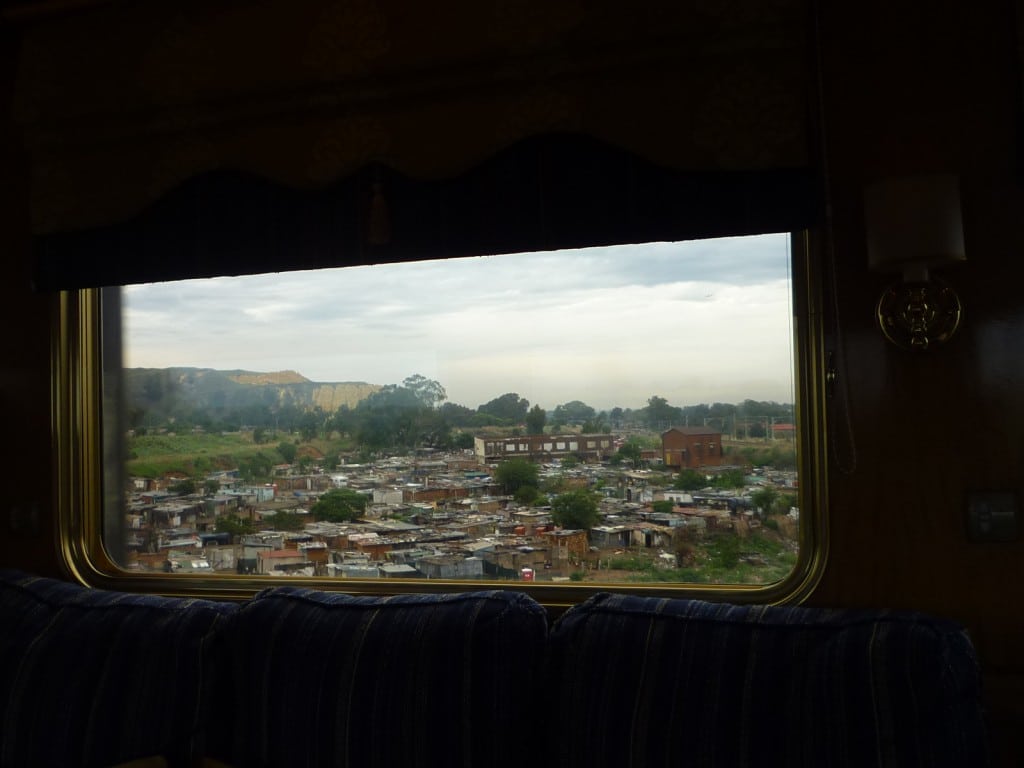 We also saw several mine dumps. 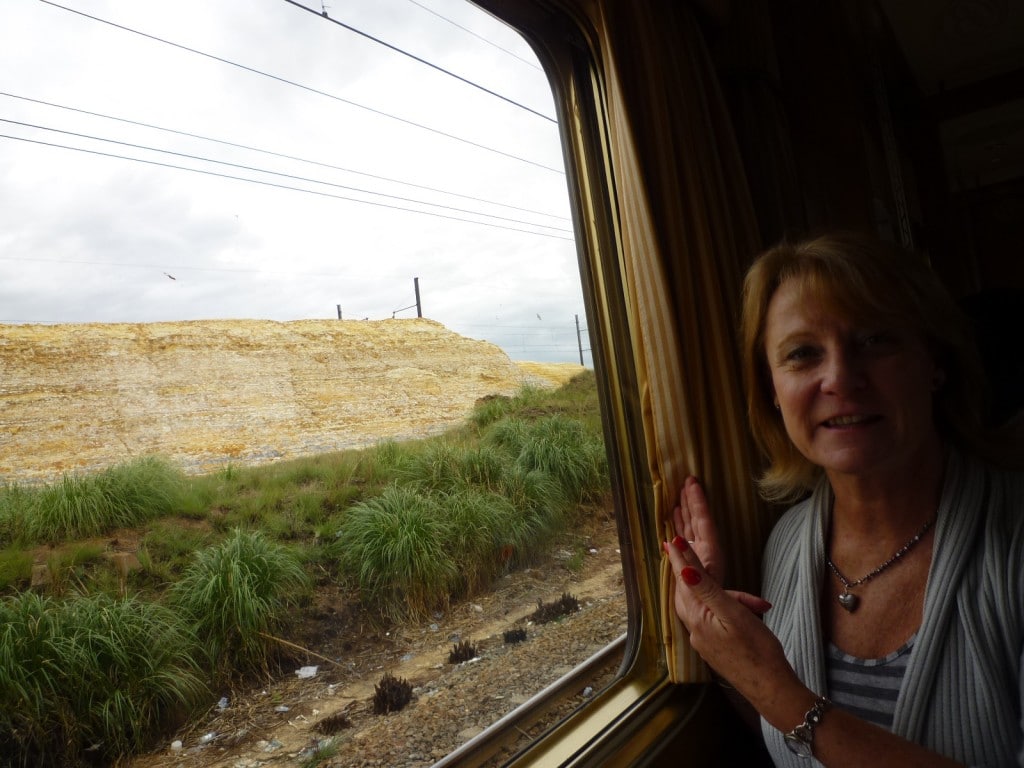 Our progress was very slow and we were stationary for long periods of time. We were informed by Vincent, the very competent train manager, that a broken down train had delayed our departure from Pretoria and overhead line problems were now delaying our progress. We were not too concerned because our attention had turned to food.

Eating is a serious activity on the Blue Train. The important times on the first day on this routing are as follows:

The dining car seating capacity is 40 so just over half the guests can dine at a sitting. The F&B manager therefore allocates guests to either the first sitting at both meals or the second sitting at both meals. The disadvantage of that is that if one is allocated to the first sitting then there is a rush after the Kimberley excursion to get ready for dinner. It is far preferable to have the time to bath at your leisure, dress without pressure and then have pre dinner drinks.  If one is allocated to the second sitting then you have a very long wait for Brunch. You probably left home at 06h30 to get to the station on time and probably didn’t eat a full breakfast so it is preferable to have Brunch at 10h30 than 12h30. Also if you only finish Brunch at 14h30 you have no interest in the lovely High Tea at 15h30 (although it does stay on the table in the lounge until 17h00). We were lucky that Mosa, the F&B manager, agreed to let us have Brunch at the first sitting and dinner at the second sitting.

The dining car is beautiful and comfortable. There is a sliver service and so one feels very spoilt. The countryside passes by as one eats. The three course menu only offered two choices for each course plus a vegetarian option. The food was lovely but it was not special! I recognise that cooking conditions must be difficult but when we travelled on the Orient Express they managed to produce very special cuisine. This should have been better. The waiters were attentive but they would not have managed in a top restaurant. Nothing was bad. We expected it to be better. It was still a lovely experience.

The scenery on this route is not very interesting. Much of the trip is through the Karoo which is semi arid where several acres are needed to keep one sheep alive each year. The train travels all night through the Karoo. But even the route through Vereeniging, Potchefstroom and Klerksdorp to Kimberley is relatively flat, fairly featureless with the occasional settlement and mine head. A splendid high tea served in the lounge distracted us for a while. 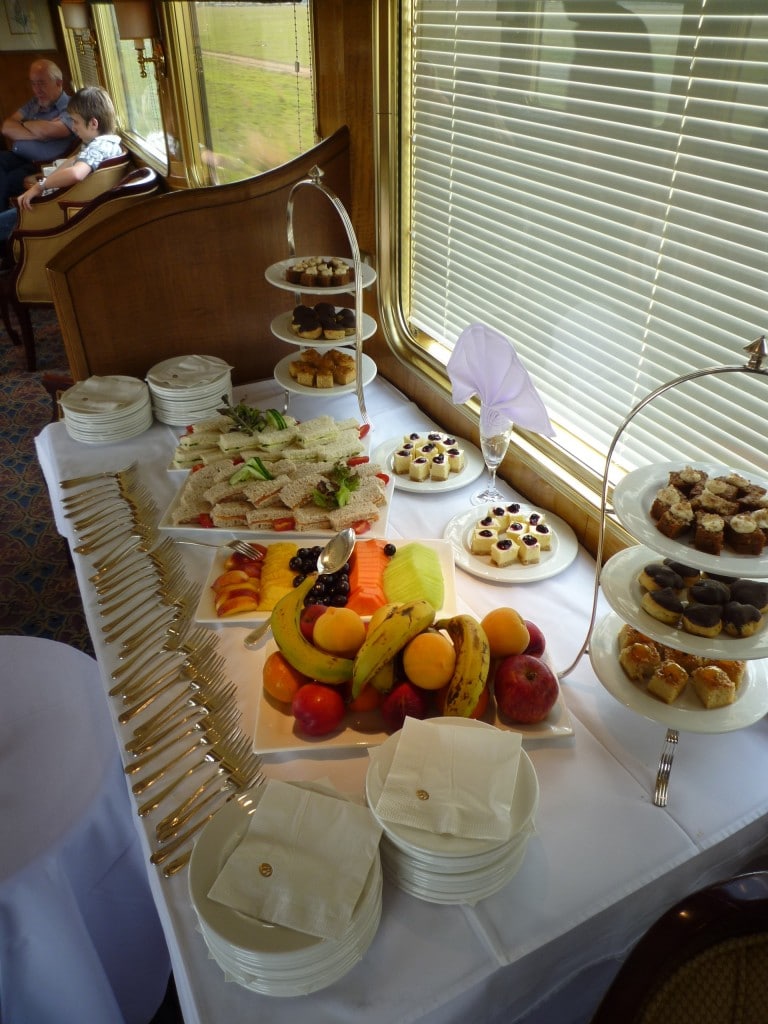 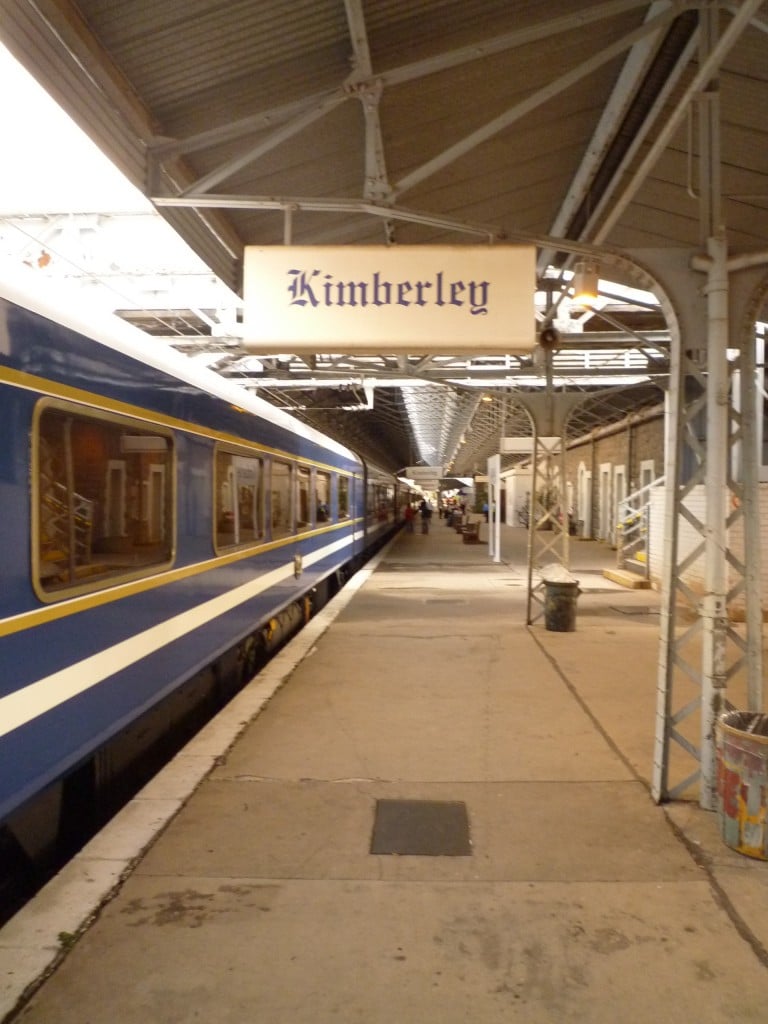 While they filled up with water and diesel we had time to look at the Railway Museum at the station and drink sherry from Blue Train glasses.

After the train departed from Kimberley and steamed into the black night we had a bath and dressed for dinner. Generally men (but unfortunately not all) dress in suits or jacket and tie and women dress up. We relaxed in the lounge and had pre dinner drinks. Our dinner serving was called at 21h15 and we had a leisurely and pleasant dinner 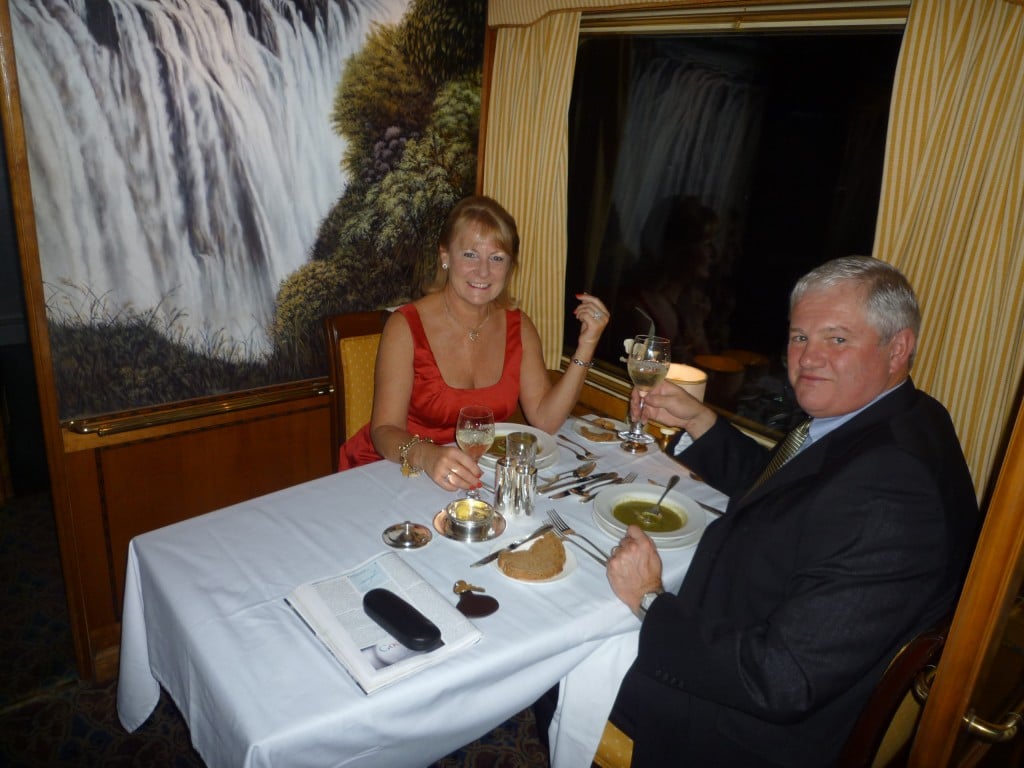 followed by after dinner drinks. We turned our lights off at about midnight and were rocked to sleep by the gentle motion of the train.

I was awake at about 06h00 and made my way to the lounge car where the staff were preparing for the day. I watched the scenery as we passed through Laingsburg, Matjiesfontein and Touws River. The butlers kept the barman busy preparing early morning coffee for the suites throughout the train.

At about 08h00 we went into breakfast and shortly afterwards went through a 13kms tunnel followed by three shorter tunnels. The scenery for the next hour was the best of the trip as we travelled the length of the Hex River Valley. We had a wonderful view of the vineyeards and other fruit orchards contained by the mountains. Unfortunately many passengers had not yet lifted the blinds in their suites and so missed this special view. 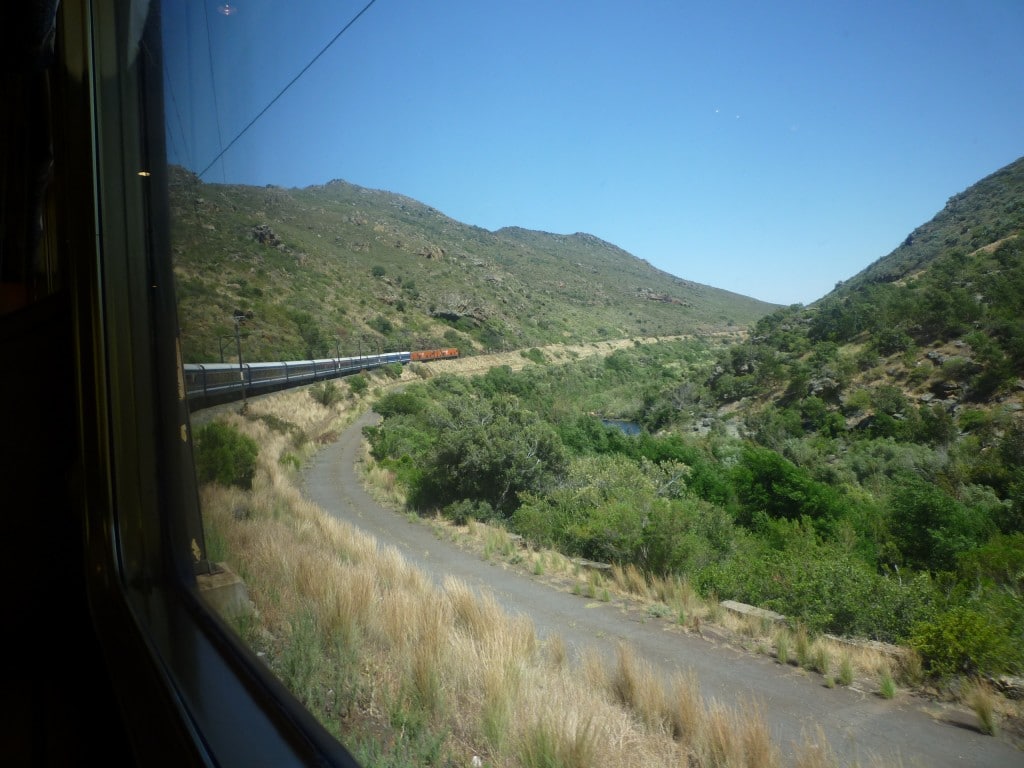 It is my view that the Pretoria to Cape Town route is preferable to the Cape Town to Pretoria route. The scenery near Cape Town is more interesting than the scenery near Johannesburg and Pretoria and it is preferable to have the prettier scenery later in the trip when the novelty of the train is wearing off. Also the Big Hole excursion in Kimberley is significantly more interesting than the Matjiesfontein stop off on the other route. There is no excursion in Kimberley on the Cape Town to Pretoria route.

The train stopped at Worcester to change drivers for the last time (there are five shifts of drivers in the 27 hours) and collect newspapers. 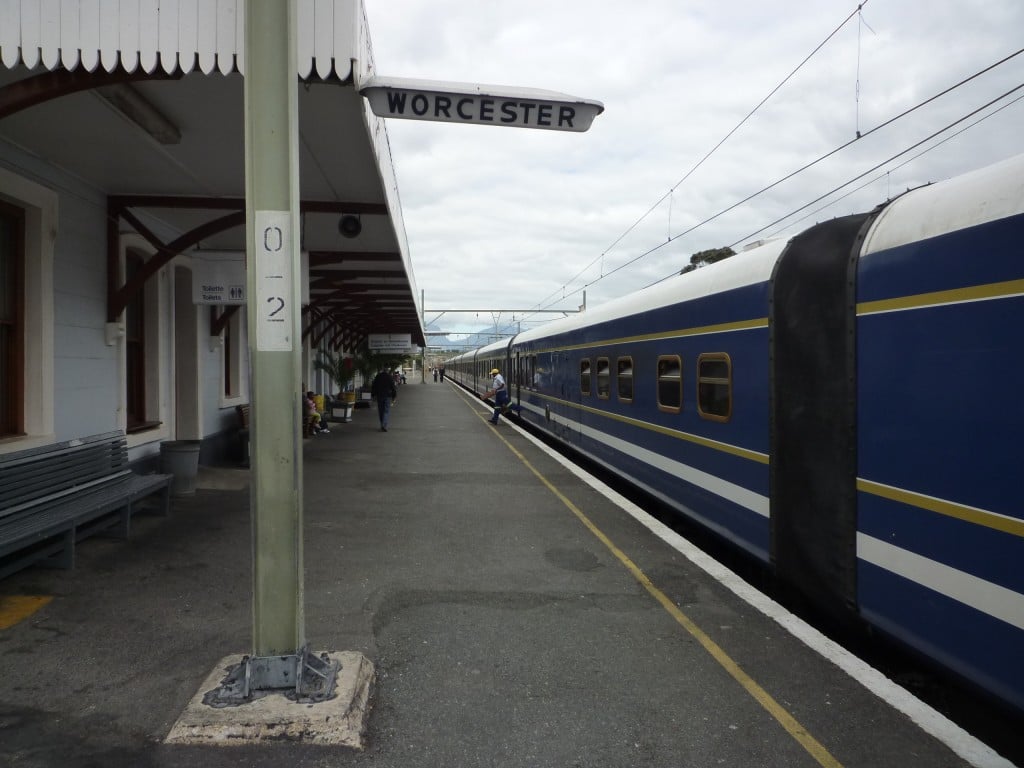 To avoid the mountains the train then headed due north through Wolseley and Gouda and then south again through Wellington and Paarl before the final run through the edge of the Stellenbosch  winelands and into Cape Town. We arrived about 30 minutes late at 12h30 and waited in the lounge on the station while our luggage was brought from the train and transferred to the waiting taxis, coaches and other forms of transport.

So to summarise. This is a luxury train with very comfortable suites and a pleasant lounge and dining car. Service was outstanding in the lounge and from the suite butler and adequate in the dining car. The constant flow of drinks, coffee, snacks, high tea and meals was lovely even though the choice and quality of the food was not as good as it should have been. The scenery was not exciting because of the route travelled, but could be great on a different route. It was disappointing that the train was delayed and we missed our Kimberley excursion. I will probably hesitate to do the trip again as there are plenty of better ways to spend £1,000 per person in 27 hours.