Tibby, David and I had lunch at the restaurant at the Durbanville Hills Wine Estate near Cape Town on Saturday 18th December 2010. We know and are fans of their Sauvignon Blanc and Merlot. The experience was not as good as it should have been.

The restaurant is in their relatively new building one floor above the wine tasting area. The opportunity to design something special has been wasted. Most importantly the building sits like a military blockhouse on a hill with silly windows. There should have been huge windows displaying the wonder of the surrounding vineyards and the long views. The tasting area has an insufficient window looking down the hill but the restaurant has the bar located on that elevation and no window. On the one side of the restaurant there is a window but it is too small and too high to provide any views for seated diners. There are large windows on the other side but they look on to a large veranda which extends too far to allow views. The high ceiling should give a sense of grandeur but instead it leaves the tables seemingly marooned. The waiters have a long way to walk from the kitchen which leaves too much action away from the tables.

The restaurant does not seem to be managed well. The maitre d’ appeared briefly after we were seated to welcome us and then disappeared for the rest of the meal. I later realised that she was entertaining her own friends at the best table. Her lack of attention was visible. The waiters seemed to be young and inexperienced and did not invoke any sense of confidence. The three of us sat at a table set for four. Some, but not all of the fourth setting was removed. Once our orders had been placed there was no attempt to remove unnecessary glasses or cutlery. The relatively limited lunch menu probably offered sufficient alternatives for a light lunch. I chose the house speciality of chicken pie. Unconventionally it was served in a light filo pastry which was partially open. It had all the appearances of being special but there was an herb or spice in it that I found disturbing. I found the accompanying fat chips to be undercooked. Tibby and David respectively enjoyed their cheese fondue and ostrich burger.

When I tried to check some facts on the Durbanville Hills website I could not get in because it required Adobe Flash Player 10.1 but that is not currently available for my 64-bit web browser. Some web designer has been allowed to fill the site with the latest technology, forgetting that a website should be easily available to all web users. Management was probably too busy entertaining friends to check whether the website worked.

The wine estate has lost its way in the design and management of this restaurant. There are many better alternatives.

Back to the Restaurants in South Africa index
0
Prev Post 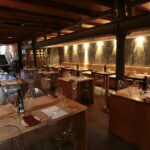