We attended a lecture by Roger Tooth, the Guardian Newspaper’s Head of Photography and Guardian photographer David Levene on 3rd March 2011 at the National Portrait Gallery in London. It provided a fascinating insight into photographs in a major newspaper.

In 2005 The Guardian went to a new style format and started using new presses and equipment which offered additional possibilities in the display of photos. The editor took the view that the middle double page spread could be used entirely to display one photograph. This started with three days a week but soon increased to five days a week. This display is called Eyewitness.

Roger and David explained that the principle was that the photograph had to be striking and of a high quality. It often has a lot of detail that allows the viewer to spend time examining it. They showed us about forty photographs on a screen over a period of eighty minutes and explained why they chose them and gave some background to the photos themselves. These included news photos of troops in Belfast, a military medical helicopter evacuation in Afghanistan, a hospital scene in Pakistan after the floods, New Orleans after the hurricane, Branscombe Beach in Devon after the Napoli wreck and refugee children being plagued by flies. There were softer life photos of a newly born premature baby, of the Dhobi laundry Ghats in Mumbai, a cow in an Indian textile shop, pedestrians crossing a Tokyo street junction, chess players at the Budapest public swimming pool, ice fishermen at a South Korean ice festival, cricket fans queuing at Lords, a poker competition in the US and an eccentric collector of small household items. They showed landscapes and photos of nature including paddy fields in China, a rhino calf with her mother and the Northern Lights as well as cityscapes like overhead photos of Battersea Power Station and London City at night. There were art photos like a montage of people on escalators in the London Underground and Antony Gormley’s photo-luminescent display at the White Cube Gallery, London. There was even a celebrity photo of Karl Lagerfeld. Each one was spectacular.

Roger explained that they subscribe to agency picture libraries that generate about 15,000 new photographs each day. Picture editors scan these looking for something unique. They also send their staff photographers all over the world specifically looking for subjects to photograph. He talked about their standards that permit adjusting the size and contrast of photos but do not permit enhancing or digitally altering them. There was a small amount of technical talk about the cameras and photos. The presentational style was relaxed, informative and entertaining. This was a delightful event.

The last 450 Eyewitness photographs can be seen at:

The only small irritant was the organization by the National Portrait Gallery. Their staff at the entrance to the gallery and at the box office weren’t fully informed about the event, the ticket distribution was slow, they kettled us in a small waiting area and started late. 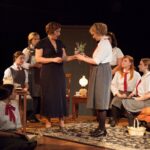