We arrived at our Santiago hotel location, according to our sat nav, and I did not dare to stop. We had stayed in this hotel five years ago and had memories of a tree lined road with smart apartment buildings in the neighbourhood. The street that we were in looked like a war scene with graffiti on every building. I accelerated to get out of the area fast to a place where we could check the hotel name and address and rekey it into our sat nav. When the sat nav indicated that we should return to the street that we had left we found some young tour guides, who spoke English, and confirmed that our sat nav was correct. We returned carefully, to find a building in that street, with our hotel name. I was now convinced that I had made an error and had booked at the wrong hotel. We entered the hotel and before doing anything further I went looking for the dining room, patio and pool because I knew that I would recognise it. Sure enough, we were in the same hotel that we previously stayed in.

We were aware of the protests that have been happening across Chile against the current democratically elected government. The protests started with an increase in metro fares but then grew as people resented the fact that the politicians were seen as corrupt and that the wealth of the country is concentrated in a very small elite. We had seen a few signs of the protests, mainly in the form of boarded bank windows and light graffiti, in Punta Arenas and Valparaiso, but what we saw in the street of our hotel was extreme. It was explained to us that the Santiago protests started with gatherings in the Plaza Baquedano, three hundred metres from the hotel, and that the protestors erupted from there, blanketing the nearby streets with graffiti. We were assured that the protestors, like most people, were still on their summer holidays, and that we could walk safely in the neighbourhood. We did that carefully, and soon found the restaurants and shops that we had enjoyed last time.

The next day our guide took us first to the centre of the city, where the main square is surrounded by the cathedral and other major buildings. There was no graffiti here although most buildings, including the doors of the cathedral, were protected with boards and corrugated iron. Our guide explained that this area had been completely closed down by the police to prevent protestors reaching it. The gardens of another square had been closed off with temporary fencing to prevent defacement of the statutes.

And then as our tour took us to other parts of the city we saw beautiful parks, lovely boulevards, magnificent houses, the tallest building in South America (Costanero) and a shopping mall that extended to six floors of every name that you all see in your cities. Santiago is built in a valley at the foot of the Andes. There are several vantage points including hills, a cable car and the viewing platform at the top of Costanero which give beautiful views of the city, and on a clear day give a view of the snow tipped Andes. Unfortunately, during our visit, the smog hid most of the Andes.

Santiago was our favourite South American city after our last visit. Last time Chile was an easier country to travel in than Brazil and Argentina. Chile’s people are better educated and appear, generally, even now, to be better off than the neigbouring countries. Until a political solution is found to the current impasse Chile and Santiago will remain slightly uncomfortable for tourists. We were told that there are calls on the internet for the protests to restart with a big rally on 1st March. We will not be there to see it. 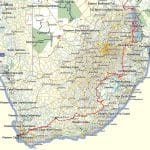