I attended a lecture onboard our cruise, hosted by the World Wildlife Fund, which principally focused on the work and legacy of Douglas Tompkins. Co-founder of The North Face and Esprit, Doug sold his part of Esprit in the early 1990s and moved to Chile to do conservation work full time with his wife, Kristine McDivitt Tompkins, the former CEO of Patagonia, Inc. Doug was killed in a kayaking accident 2015. The foundations under the Tompkins Conservation umbrella, along with their partners, have helped to conserve over 14 million acres in Chile and Argentina and have created five national parks and are in the process of creating five more. Chile has protected 20% of its land in parks and reserves. More information on Tomkins Conservation can be found at: http://www.tompkinsconservation.org/home.htm

Advocacy by Tomkins Conservation probably also contributed to the creation of the law in Chile in February 2018 that created a further 450,000 square miles of marine protected areas. Marine protected areas (MPAs) are regions of the sea in which human activities are regulated in order to help conserve, manage, and protect vulnerable ecosystems and wildlife. The way in which human activity is restricted in each MPA varies greatly – in ‘no-take’ MPAs, no extraction of resources, such as fishing or mining, is permitted, while in ‘restricted use’ MPAs certain human activities may be permitted while others are not, or activity can be restricted depending on season, fishing gear type, or other factors. With the new parks, more than 40 percent of Chilean waters have some level of legal protection. There is some criticism that the Chilean government has not committed sufficient resources to properly manage, monitor and patrol all these conservation areas but they must be given credit for taking the first steps, both on land and sea.

Back to the Odds and Sods index
0 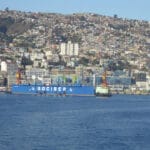