We stayed three nights in Valparaiso from 4th February 2020. Valparaiso was the principal port of Chile for hundreds of years and the government, navy and wealthy traders built several impressive buildings. The opening of the Panama Canal reduced its importance and recently San Antonio has been made the preferred port for imports. Valparaiso is now a gritty city perched on thirteen hills. The old established houses are now surrounded by thousands of lesser houses, including many that look like shacks, (apparently) precariously balanced on the steep slopes of the hills. Most houses are covered with corrugated iron sheets, apparently to hide the rough finish behind. Thirteen funiculars (there used to be more) transport pedestrians up steep cliffs. The roads twist and turn with sudden corners and steep ascents. Small municipal buses follow amazing routes. Residents have no need for gyms as their daily exercise of getting to their houses keeps their hearts in a healthy condition. Many houses have very long flights of stairs that pass their front doors. I have no idea how washing machines and fridges get delivered. This mass of hodge podge buildings await the next, inevitable earthquake and fight back the relatively common fires that attack from beyond the hills. A huge number of the houses are covered in the most amazing street art. Many houseowners pay artists to decorate their external walls. The street art has recently been added to with graffiti supporting the current wave of anti-government protests. We had dinner in three different restuarants, each with a spectacular view over the city.

We hired a car and ten kilometres north, on the coast, found Vina del Mar, a world away from Valparaiso. This is a holiday destination with thousands of smart apartments, beach side restaurants and up market shopping. No street art or graffiti is to be found. As we headed inland and east to Santiago on Saturday, the traffic to the coast was bumper to bumper with the workers of Santiago, heading, not for Valparaiso but to Vina del Mar. 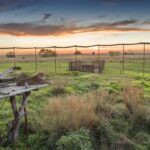