Tibby and I spent four days on Lamu Island from 24th October 2020.

The island is part of the Lamu Archipelago of ten inhabited islands close to the north coast of Kenya. We did a quick visit to the island thirty five years ago and have been meaning to get back.

Wikepedia tells us that ‘Lamu Island is about the size of Manhattan and has a population of about 250,000 who are mainly Muslim. Lamu Town on Lamu Island is Kenya’s oldest continually inhabited town, and was one of the original Swahili settlements along coastal East Africa. It is believed to have been established in 1370. From 1506 Portugal controlled Lamu until 1652 when Oman assisted Lamu to end Portuguese control. Lamu’s years as an Omani protectorate to the early 19th century mark the town’s golden age. During this period, Lamu became a centre of poetry, politics, arts and crafts as well as trade. Many of the buildings of the town were constructed during this period in a distinct classical style. Aside from its thriving arts and crafts trading, Lamu became a literary and scholastic centre. Woman writers such as the poet Mwana Kupona – famed for her Advice on the Wifely Duty – had a higher status in Lamu than was the convention in Kenya at the time. Lamu’s economy was based on the slave trade until abolition in the year 1907. Other traditional exports included ivory, mangrove, turtle shells and rhinoceros horn, which were shipped via the Indian Ocean to the Middle East and India.’

Today Lamu Island is a tourism centre with a number of low level hotels. Many foreigners have bought properties in Shela Village (and a lesser number in Lamu Town two miles away) and have then extended their houses, often by adding floors. Generally they have respected the traditional building styles and their renovation work has supported the construction industry including the maintenance of traditional skills.

Lamu Town is the main centre and is a mix of African and Arabic cultures.

Shela Village is two miles from Lamu Town and is a smaller, more relaxed place very focused on tourists. One can walk from the village to the town, but otherwise one catches a boat. There are only five motor vehicles on the island and two of them are ambulances, one for people and one for donkeys. There are 3,000 donkeys on the island and they transport most goods that need to be moved.

We stayed at Peponi Hotel in Shela Village. The hotel has been there since the 1960s and is a wonderfully comfortable place to stay at. From our balcony we watched the world pass by on the beach.

Manda Island is part of the Lamu Archipelago. The island is different from the other islands in that, except for a soil covering, it is comprised of dead coral. This means that water is scarce on the island because water does not store in the coral. I visited the island and went to the ruins of Takwa Town. The town was founded around 1500, and probably abandoned around 1700 and had a population of 2,500 people. It has been suggested that the town was abandoned because they could not find enough water to maintain the population. The mosque is the best preserved of the buildings.

On the way back to Lamu Island my guide took me to the coral cutting village. The principal activity in this village is cutting bricks of dead coral in quarries. These are the principal bricks used in the area because they are very hard yet allow walls to breathe. Inevitably there is a continuous business of ferrying water to this village.

In recent years a few hotels and a few private holiday houses have been built on Manda but their existence was only possible because they laid a pipeline from Lamu Island to supply themselves with water.

We did a sunset sailing cruise on a dhow which was a lovely experience.

Back to the Travels in Africa index
0 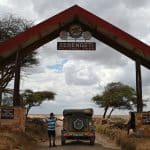 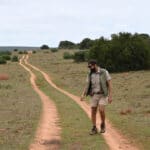